There is something about Twitter that is making me think. It is to do with re-tweeting links that I think may be valuable to those who follow me.

What happens if the original link I tweet is “suspect’ in some way and I don’t find out until after a conversation has developed amongst a few my own followers.

In the most recent case of this happening I had actually read the original blog-posting, the Tweet about it came from a trusted site, I (and thousands of others) follow and I was moved by the content.

I will expand on the actual sites a little later but I am wondering about the mental-filters I apply, when someone I trust, Tweets about “whatever”.

Do I trust the Tweeter or do I fully read the link and any subsequent conversation that develops around it especially if it is to a blog posting?

Critically, do the people who follow me, trust me to have activated that type of filtering?

Are there some discussions that require more care…Are there always, as Mary Loftus asked

The tweet was from Mashable and this is the link in question (since updated by Mashable). It is entitled “I am Adam Lanza’s Mother” and is essentially about mental health issues raised by the shootings in Connecticut. I re-tweeted it as follows

Pamela O’ Brien and I developed a short conversation around the Tweet.

Then I checked my interactions the next morning and found this

It set me  wondering – which was the most important conversation – the one around the stability or otherwise of the author of the original blog posting or the insights that Pamela O’ Brien and I gained from it?

I purposely returned to Benklers’ Wealth of Networks (2006) for some insight.

“It was much more likely that, given the freedom to design our own communications environment flexibly and to tailor it to our own individual needs dynamically over time, we would create a system that lets us strengthen the ties that are most important to us“. ( p 271 my emphasis).

Twitter (depending on how it is used) can be about strengthening ties, particularity in the  communities one is active in. In my case #edchatie.

There is something about Twitter that is making us think more profoundly about content, context and communication and that can only be good. There is a lot more to said about this, but for now, my train of thought is out there. 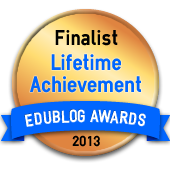